It had a rocky start, but as the London Eye heads towards its second decade of operation, the giant Ferris Wheel has become the most popular paid tourist attraction in the United Kingdom.

Situated on the south bank of the River Thames between Westminster Bridge and Hungerford Bridge, the London Eye was opened on New Years Eve in 1999 in time for Millennium celebrations.

However, technical problems prevented the public from coming aboard for a couple of months.

Since then, however, the wheel has grown steadily in stature, with more than three-and-a-half million users a year.

The popularity of the attraction is understandable. We were amazed at the awe-inspiring and uninterrupted views over the grand city of London.

It was a cloudy day, but, from the top – about 443 feet or 135 metres above ground – the scene was breathtaking.

The Eye has 32 air-conditioned capsules (one for each of the city’s boroughs), but they’re numbered from one to 33.

As with many buildings and other structures, there is no number 13 capsule— and the cars skip from 12 to 14.

Each ride takes a leisurely 30 minutes, during which the Eye makes one complete cycle.

The popularity of the London Eye has continues to grow despite losing its tag as the tallest Ferris Wheel in the world.

That title is now held by a 550 feet (167.6 metre) monster in Las Vegas, Navada, USA, which will itself be eclipsed by another giant under construction on Staten Island in New York harbour. 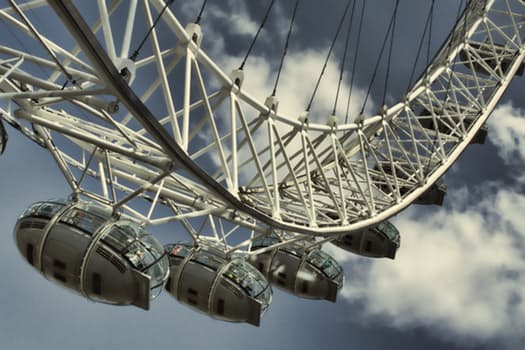 The Staten Island wheel is expected to be 630 feet (192 metres) tall when it opens next year.