Anyone who has visited New York City in Autumn and walked along the High Line overhead park will understand the appeal of the controversial Garden Bridge proposal in London, United Kingdom.

The High Line is a former elevated rail corridor transformed into a green strip above the rooftops of West Manhattan.

We’ve always found it to be a gentle and pleasant walk that attracts big crowds of locals and tourists alike, especially in the cooler months running up to winter.

A pedestrian bridge of flowers

In London, the proposal is to create a pedestrian garden floating above the River Thames on a bridge stretching from South Bank to Temple tube station in the centre of the city.

Originally suggested by the actress, Joanne Lumley in 1998 as a memorial to Princess Diana, construction of the Garden Bridge is officially scheduled to start in the middle of this year and continue until late 2018 – if everyone agrees. 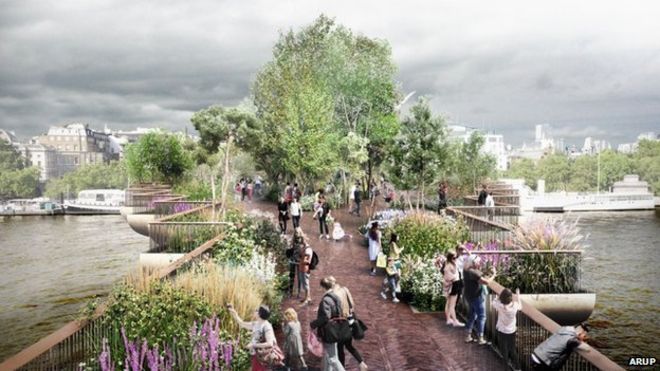 However, the project has been controversial for much of its life, with critics questioning, among other things, its necessity; appropriateness; funding, maintenance; and likely impact on river views.

There has also been concern about the impact of traffic during construction and the affect of the work on riverside walkways.

Despite the conflicting opinions, the Garden Bridge Trust announced last week that it had signed a construction contract with the joint venture of Bouygues Travaux Publics and Cimolai SpA.

The Garden Bridge proposal involves 270 trees, 2,000 shrubs and 64,000 bulbs in a garden that proponents say will be crossed up to seven million times a year.

The idea is to plant marshland habitat on the South Bank side of the bridge, leading people through to clifftop landscape in the middle and ornamental gardens on the north side of the River Thames.

Plantings will aim to provide year-round colour, including Spring blossoms; summer flowers, autumn colours and the evergreens of winter. 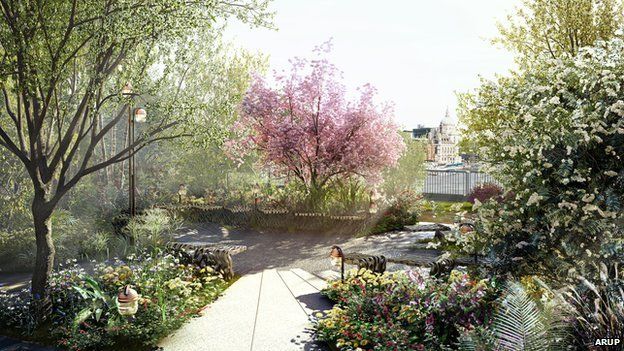 In mid-2015, UK media reported that the Garden Bridge would cost about 175 million pounds.

At the risk of offending the many critics, we predict that the Garden Bridge will eventually become a novel tourist attraction to rival the London Eye in popularity.